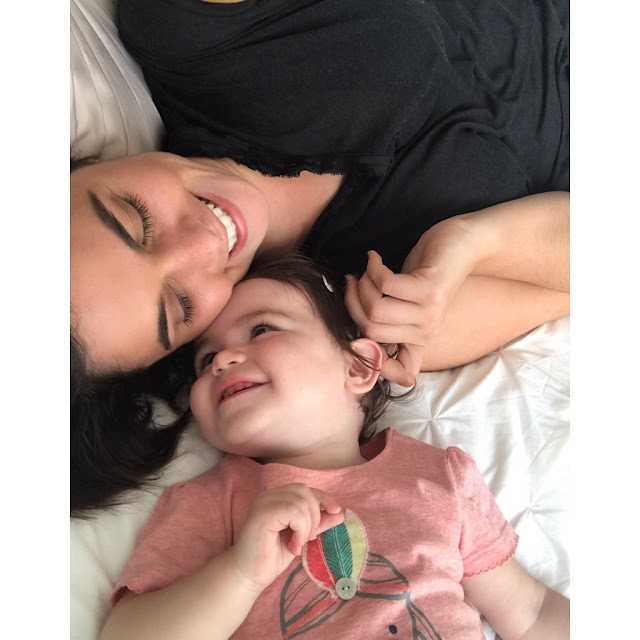 So, this post wasn't actually what I had in mind today. Try as I may, I just couldn't stop myself from writing it... I know that I rarely write about things that can be seen as too personal, but it's time to get real, we've known each other for long enough now...

I won't get into the nitty gritty of why things didn't work out with my daughter's father, as I'd like to keep that sort of thing private, but the main part of these new circumstances was realisation that I was now a single mum. For some reason, that thought kept me awake at night for weeks.

I would see these incredible single parents raising children alone and always feel such admiration for them. I was so certain that I would never be able to do anything like that. Coping with it all totally alone sounded like my idea of hell and would feel quite blessed to have my family together.

Now that the shoe is on the other foot, I want to step in a time machine, go back to that past me, take off that shoe and slap myself round the face with it... repeatedly. What an absolute idiot I was to think that way! Of course I've been able to do it alone, and I know now that I'm doing a fabulous job of raising my daughter. But don't get me wrong, it has taken me quite some time to get to this point.

When Zara's father and I first separated my paranoia was on some crazy, over drive. I couldn't do anything without thinking someone was judging me. With motherhood filled to the brim with contrasting opinions and very little positivity at times, throwing in the fact I was a single mum made me feel worse than ever! Don't ask me why, but being labelled as a single parent kicks up a lot of negativity from my experiences, and it's almost considered the worse thing possible.

I felt as though I couldn't bribe my toddler with a treat to stay quiet, couldn't let her go out looking messy and defiantly not run riot at any parties or soft plays. In my head, if someone saw me with a naughty, crying, messy child, I was basically showing the world I wasn't coping. All because of this stupid stigma I had built up in my head about my new situation. I just couldn't shift the thought that people were looking at me, eyes full of pity and thinking "she's doing it all on her own, poor girl" not to mention, "well that's what happens when you don't get married first." Yes, I still have older generations say that to me.... usually when I don't really ask for their opinions...

I honestly thought I was going to fail at the most important responsibility I had in the world. I was filled with so much self doubt that I was almost certain that this huge life change was some dreaded curse that will hang heavy round my neck forever.

It wasn't until one sunny afternoon Z and I were strolling back from the shops, me with my arms full and Zara following behind, clutching the mushrooms she had insisted on carrying... We ended up bumping into a neighbour, after some pleasant chit chat, she looked down at my grinning daughter, she laughed and said "Isn't your mummy doing a great job with you?"
With that one simple statement, I was floored, my knees started to shake and my palms become clammy. I found myself opening and closing my mouth, like some sort of strange fish, I wanted to throw my arms around her and hug her so tightly she would have differently breathing. With just one simple sentence, this lady had managed to stop the stresses and worries that had been flooding my head for months. It was after that day that my paranoia and over active imagination basically took a chill pill. I have found I've relaxed and started to enjoy myself again, the fog has lifted and I feel as though I can proudly say "Yep, I'm a single mum"

I must say that the dooming thoughts of doing it all alone no longer seem that scary either, the amount I do hasn't really changed, and if anything I get a lot more me time when Z is out and about with her dad. You could even call it some what relaxing, and I find myself finishing a cuppa whilst it's still hot a lot of the time too!

So, yeah I'm a single mum nowadays. Doesn't make me a bad person or some sort of failure. Instead it's given me a burst of fire in the stomach to reach for the stars, maybe even higher than that! I am blessed to have a beautiful, healthy little girl who is the light of her father and my own lives. She has taught me so much already and shown me I can be stronger than I ever thought I could be, physically, emotionally and mentally.

I guess I wanted to get a little deep and meaningful today as I figured even if this post helps just one person out there, that will make my day. So if you're reading this, and you have or had the same thoughts and concerns as me, then this is a reminder to let you know you've got this. Don't you dare doubt yourself, I know it feels like utter crap now, but you'll impress yourself with what you can achieve. I mean, you're a mum for crying out loud, you're practically Wonder Woman already!


There you have it, a little subject that is the most controversial I've written to date. Don't worry, there'll be something a little cheery up soon!